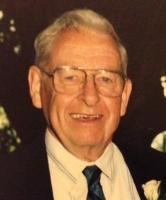 Robert B. Wall passed away March 15, 2016 at Community Hospice in Jacksonville, Fla., at the age of 89. He was born in Auburn, N.Y., on March 3, 1927, the son of the late Raymond J. and Margaret (Bolger) Wall. Beloved father of daughter, Agnes (Billy) Love, of Blue Hill, Maine; sons, Raymond J. and Robert E. (Silvana) Wall, both of Jacksonville, Fla. He is also survived by grandsons, Justin (Christy) Sobczak, of Christiansburg, Va., Matthew Sobczak, of Staunton, Va., Colin Sobczak, of Buffalo, N.Y., Kevin Wall, of San Jose, Calif., and Diego Wall, of Jacksonville, Fla., and great-grandson, Ronan Sobczak, of Christiansburg, Va. Additionally, he leaves behind sisters-in-law, Margaret Wall and Ann Wall, and loving cousins, nieces, and nephews. He was predeceased by his former wife, Mary Haar Arnold, and brothers, Raymond Wall and Thomas Wall. Robert was a graduate of Holy Family High School, Auburn, N.Y. in 1945. He served in the U.S. Army (1945-1947), including a year in Germany. He was a graduate of Le Moyne College, Syracuse, N.Y. in 1952, and then received his master’s degree from Canisius College in Buffalo, N.Y. He taught high school math for more than 30 years in Niagara Falls and Williamsville, N.Y., retiring from Williamsville South High School in 1982. Upon retirement, he moved back to Auburn, N.Y. to care for his mother and then relocated to Jacksonville, Fla. after her death in 1989, where he had resided ever since. A Mass of Christian burial will be celebrated at 10 a.m. on Monday, March 21, 2016 in Holy Family Church, Auburn with the Rev. John Gathenya, Pastor, as celebrant. Interment will follow in St. Joseph’s Cemetery with full military honors. Farrell’s Funeral Service, Inc., 84 South St., Auburn.