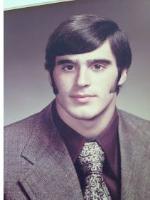 David James Costisick, 60, of Los Angeles, Calif., passed away on Wednesday, Dec. 7, 2016. He was a resident of California for the past 40 years. A native of Auburn, he was born on Sept. 27, 1956, the son Patricia M. and the late Joseph Costisick. A graduate of Auburn High School, he was a well-known member of the Auburn football, baseball, and basketball teams, throughout his high school years. He played Pop Warner Football, Little League Baseball, and was coached by his father. When he moved to California his sports focused on golf, and he was employed in the golf industry for his career. He was employed with the Riviera Country Club, and currently was with Back Nine Greens. Surviving is his son, David Joseph Costisick, of Los Angeles, Calif.; his mother, Patricia Costisick, of Auburn; sisters, Anne Costisick (John Bocon), of Hingham, Mass., Suzanne Gauthier, of Auburn, Mary Jo Costello (James), of Penfield, N.Y., and Kathleen (Michael) Aldrich, of Auburn; nieces and nephews, Sam Bocon, Alexandra Bocon, Christopher Gauthier, Jim Costello, Jackie Costello Collins, Michael Aldrich, and Kaitlyn Aldrich.A long time special friend, Kathie Cole. A Mass of Christian burial will be celebrated at 10 a.m. Monday, Dec. 26, 2016 in Sacred Heart Church with Rev. Michael Brown, Pastor, as celebrant. Interment will be in St. Joseph’s Cemetery. A calling hour will be held from 9 to 9:45 a.m. in the church prior to the funeral Mass. Memorials may be made to Auburn Pop Warner, P.O. Box 621, Auburn, NY 13021.