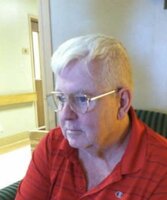 Charlie Cook passed away Wednesday, June 15, 2022 after a long and difficult struggle with Parkinson's Disease. Charlie was a resident of The Common's on St. Anthony in Auburn NY. "Cookie", as he was so affectionately called by his family of care givers, was born on July 7, 1944 in Niagara Falls NY, the son of Wanda Ella (Cross) Cook and Cleland Connor Cook. He spent the last nine years of his life at The Commons on St. Anthony in Auburn NY. Prior to that he lived in So. Otselic NY, Cortland NY, California, and Skaneateles, NY with his sister Vicki Cook Condie MacTavish. Charlie was predeceased by his parents and by his beloved "Mikey; his brother-in-law Michael Condie. Surviving are his sister Vicki MacTavish (John) of Sebring, FL; his children: Jesse Cook Seeley (Llewellyn) and Charles Curtis Cook (Beth) both of Trumansburg NY; his grandchildren: Jameson Llewellyn Seely and Vincent Turk; his nieces and nephews: Jennifer Condie Read (Bob), Jamie Michael Condie (Marika) and Stephen Joseph Condie (Sara);and his stepson Joshua Slocum. He is also survived by his grand-nieces and nephews: Ella Lynne Read,; John Michael Read, Kevin Michael Condie and Nathan Joseph Condie; also are his cousins: Dean Wadsworth, Jr. (Diana), Linda Wadsworth Graves (Brent) and Annie Wadsworth Butwin (John). Charlie was a free spirit all of his life having enjoyed horticulture, painting, glass blowing and guitar playing. His vivid imagination along with his Parkinsonian induced hallucinations were sadly his main source of entertainment these last several years. In lieu of monetary donations or flowers his family wishes you to remember him while doing something nice for someone else. Memorial Service will take place at a future date.