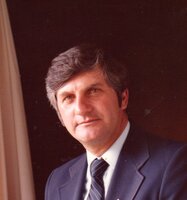 Wilson "Beaver" Long passed away peacefully on May 1, 2022. He was born in Auburn on January 27, 1935 to Wilson Long, Sr. and Irene (Callaghan) Long. A 1952 graduate of Auburn’s East High School, he served in the United States Marine Corps for three years including an overseas stint in Korea. Following his USMC service, he began a lengthy career with the New York State Electric & Gas Co., proudly serving as a NYSEG lineman for 38 years before retiring in 1994. Wilson was a life-long resident of Auburn. He was a communicant of Sacred Heart Church for over 50 years and a long-time member of the Utopia Club. He loved baseball and competed into his adult years, including at the semi-pro level in local leagues. Some of his family’s fondest memories are of Wilson anchoring the fine Snapper’s Tavern teams in the Auburn softball leagues that played at Lincoln School, with teams comprised primarily of his brothers, best friends and NYSEG co-workers. Wilson is survived by his wife of 62 years, Marlene (Fedigan) Long. Following their February 1960 marriage in Auburn and honeymoon in New York City, they established a home on Melrose Parkway where they would live for over 50 years. It was there that they raised their five children and established many life-long and multi-generational friendships. In addition to his wife, Marlene, he is survived by his five children: Sheryl Thomas and her husband Terry of Bluffton, SC; David of Wappingers Falls, NY; Stephen and his wife Leslie of Mendham, NJ; Jeffrey of Auburn, NY; and Kathleen Dalton and her husband Mark of Phoenix, AZ. Wilson delighted and enjoyed every moment in the company of his eight beloved grandchildren: Lauren (Thomas) Leone, Brendan and Emily Thomas; Allison, Christine and Michael Long; and Wilson and Katherine Dalton. He also had the good fortune of having two great-grandchildren – Luca and Cecilia Leone. Wilson is also survived by his brothers Jerry and Billy Long, as well as numerous nieces, nephews, cousins and other family members of the extended Long, Fedigan, Coomber, Marquart, Penafeather and Lacey families. He is predeceased by his parents, in-laws (Ted and Mary Fedigan) and his sister Georgia Coomber. Calling hours will take place on Thursday, May 5th from 4:00 pm - 7:00 pm at Farrell Funeral Service (84 South Street, Auburn, NY 13021). A funeral mass will be held Friday, May 6th at 10:00 am at Sacred Heart Church (90 Melrose Road, Auburn, NY 13021). Interment will then take place at St. Joseph’s Cemetery. In lieu of flowers, donations may be made to the St. Alphonsus Food Pantry, c/o St. Alphonsus Catholic Church, 85 E. Genesee Street, Auburn, NY 13021. Wilson’s family would like to extend a heartfelt thanks to the staff at the Commons at St. Anthony’s, particularly the nursing staff on the 6th floor, who cared for him in his final years. Wilson embraced all social occasions, usually accompanied by laughter, the companionship of his family and friends, as well as a cold beer or glass of wine. In that spirit, his family and friends will toast and celebrate his life at the Springside Inn following the interment