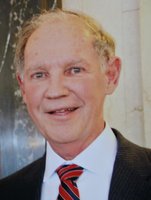 Robert C. Foster, 70, of Penn Yan, passed away Friday, April 9, 2021 at Strong Memorial Hospital in Rochester. Bob was born on April 23, 1950 to Robert and Alice (O'Brien) Foster of Auburn, and was the oldest of their five children. He grew up in a devout Irish Catholic family, who instilled in him the importance of faith and family. Bob's childhood Anna Street home – built by his great-grandfather William Shaw – was a happy gathering place for family, friends, and neighbors. Sunday night dinners were spent crowded around the dining room table, enjoying good food and lively conversation. Growing up, Bob enjoyed playing baseball. In 1960, he pitched his All-Star Team to the city league championship. He loved swimming in the family pool and biking. He also learned how to play golf at an early age, a sport that he enjoyed throughout his life. Bob was a graduate of St. Alphonsus School and Mt. Carmel High School in Auburn, Le Moyne College, and Ohio Northern University Claude W. Pettit College of Law. After graduating from law school, Bob served as a law clerk in Rochester for then State Supreme Court Justice Robert Wagner. He then came to Penn Yan, where he began practicing law with Donald Schneider in September 1977. At various points during his early career, he served as the Assistant Public Defender and the Assistant District Attorney for Yates County, the Yates County Attorney, as well as the Attorney for the Towns of Starkey and Barrington. He also served as the Attorney for the Town of Milo – a position that he held for over forty years before stepping down this past fall. He was a former Director of the Yates County Legal Assistance Corp., a former President of the Yates County Bar Association, and a former member of the Penn Yan Lions Club. In April 1982, Bob and Don formed the law partnership Schneider & Foster. Bob opened his own private law practice in 1993. Bob truly enjoyed practicing law. He focused his private practice on real estate, trusts and estates, elder law, wills, and municipal work. He was devoted to his practice, and to the many clients he served over the 44 years he practiced law in Penn Yan, working right up until his death. On October 25, 1986, Bob and Carolyn Sheridan of Penn Yan were married in St. Michael's Catholic Church. Together, they raised three children: Kara, Megan, and John. Last July, they welcomed their first grandchild, Graham Robert Barkley, lovingly named after his grandfather. Bob most enjoyed time spent with his family and with his extended family in Auburn. Road trips to Cape Cod, Myrtle Beach, Lake Placid, Pittsburgh, and New York City gave him great pleasure, and were filled with banter, coolers packed with egg salad sandwiches and cookies, and stops at favorite restaurants. His family cherished his confident, calm, and steady ways, as well as his dry sense of humor. Two of his constant companions were the family's black labs, Jake and Rory, who were always eager to greet him at the door. Bob's Catholic faith was very important to him, and family trips often included going to daily Mass. He was a member of St. Michael's Catholic Church. In June 2011, after six years of dialysis, Bob became the recipient of a kidney transplant through Donate Life at Strong Memorial Hospital. That gift of life from an anonymous donor enabled Bob to live a normal life again – for nearly 10 years – until it was necessary for him to start receiving dialysis again in November 2020. Both Bob and his family are forever grateful for that precious gift. Despite the health challenges he faced in recent years, Bob never let those challenges define him. He moved through his life with a grace, determination, and sense of practicality that is truly exemplary, taking whatever cards he was dealt in stride, shouldering through challenging times without complaint, and always finding humor along the way. He loved his family deeply, and his family deeply loved him. The quiet courage, strength, and tenacity with which he lived his life have been an inspiration for us all. Surviving him, besides his wife, Carolyn; are two daughters: Kara Foster of Raleigh NC, and Megan (Ryan) Barkley of Rochester NY; and one son, John Foster, of Pittsburgh PA; one grandson, Graham Barkley; one brother, William Foster, of Syracuse; three sisters: Mary (William) Rowe, Cheryl Foster, and Laura (Douglas) Cuthbert, all of Auburn NY; sisters-and brothers-in-law: Pamela Sheridan and George Sexton of Philadelphia and Penn Yan, J. Michael Sheridan of Newtown Square, PA, Frank and Nancy Adonnino of Geneseo, NY, Patrick and Kathleen Ross of Port Charlotte, FL, Peter Sheridan of Philadelphia, PA, and Andrew Sheridan of Chester Springs, PA; several nieces, nephews, and cousins. He was predeceased by his parents, Bob and Alice Foster; his in-laws, John and Polly Sheridan; and one cousin, Barbara (Bonnie) Dellostritto of Auburn. Calling hours will be from 9 to 10:30 a.m. Thursday, April 15, 2021 at St. Michael's Church, Penn Yan followed by a Mass of Christian Burial at 11 a.m. The Rev. Louis A. Vasile of Auburn will be the celebrant. Interment will be at St. Michael's Cemetery, Penn Yan. All COVID-19 precautions – including masks and social distancing – will be required. In lieu of flowers, please consider making memorial donations to St. Michael's Church, 312 Liberty St., Penn Yan, NY or St. Michael's School, 214 Keuka St., Penn Yan, NY.