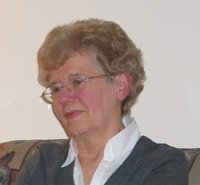 Eleanor "Ellie" Payne, age 96, passed away peacefully on January 13, 2021 at Finger Lakes Center for Living. She was just a few weeks short of turning 97 on February 2. Ellie was a life-long resident of Auburn. She worked as executive secretary at Columbian Rope Co. upon graduation, and then after marriage to her loving husband Fritz Payne in 1946, became a homemaker and mother. She was also a real estate sales person for several years as well as a Girl Scout leader. In later years, she developed an interest in collecting antique china and glassware, and enjoyed going to auctions and garage sales with Fritz. She was a communicant of St. Alphonsus Church for decades, and was a member of the Rosary Altar Society and the Home School Association. Ellie was predeceased by her parents Karl and Margaret LaBeef Wentzel of Auburn, as well as Ellie's husband of 54 years Francis "Fritz" Payne who died in 2000, and her sisters: Gladys and Arlene Wentzel, Margaret "Peggy" Furbush, and her brother and sister-in-law Karl and Marge Wentzel. She was also predeceased by her nephew William Wentzel and in-laws Helen and George Payne and their daughter Elizabeth Payne McQueeny. Ellie is survived by her daughters: Margaret Anne Wagner (Joe) of Niskayuna and Maureen Schoenberger (Mick) of Reading, PA; her grandchildren: Dr. Melissa Schoenberger (Greg) of Providence RI, and Lauren Schoenberger (Jenna) of Kingstown, RI, Ruth Wagner of Brooklyn, Michael Wagner (Maria) of Scotia; and great-grandsons: Joseph and Matthew Wagner of Scotia; nieces: Maryann Fallek (Glenn), Glenna Wisniewski (Robert), Mary McCarthy (Dave); nephews: Karl Wentzel (Mary Ann), James Furbush (Beth); cousins: Stephen Donnelly (Carlotta) and Jean Kiernan; also survived by many great nieces and nephews including Jonathan Fallek (Tracy). Ellie wished to thank her good friends and neighbors for their kindness and thoughtfulness over the years, and Dr. Godishala and Dr. Chi. She was very grateful that she was able to live in her home through age 96. Her daughters wish to give special thanks to the kind and caring staff at Finger Lakes Center for Living. Funeral services will be private. For those wishing to make a contribution in Ellie's memory, please consider the Senior Nutrition Program at the Cayuga County Office for the Aging.