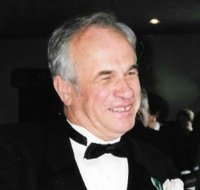 Richard J. "Dick" Welch of Scipio Center passed away unexpectedly on Monday, July 20, 2020, at his home. Dick was born on January 1, 1940, in Sherwood, N.Y., one of three children of the late James and Irene (Bowness) Welch. He graduated from Sherwood Central School. He was a long-time resident of Scipio Center, and a communicant of the Good Shepherd Catholic Community. He began working with harness horses at the age of 19, and went on to become a trainer, driver, owner, and racing official. He established Richard Welch Stables, and raced throughout the east coast. He amassed over 900 wins, his horses earned over $1.7 million in purses, and he won leading driver honors at Batavia Downs. In 2013, he was invited to participate in the "Legends of Batavia Downs" race. He was known for his trademark toothpick, as you seldom saw him without one. In 1979, Dick started a second career as a racing official with the NYS Racing and Wagering Board. He worked as a starter and judge at every Standardbred racetrack in New York State. After he retired, he purchased horses and continued his involvement in the sport. He is survived by his daughter, Mindy Kozlowski (Edward) of Maryland and son, James Welch (Melissa) of Union Springs; five grand-children, Bryan (Kristin) and Lindsey Kozlowski, Veronica, Lena and Cassandra Welch; great-grandson Max Kozlowski; brother Donald Welch (Susan); and many nieces, nephews, and cousins. He was predeceased by his sister and brother-in-law, Marilyn and Leo Soucy. Calling hours will be held from 4 to 7 p.m. on Wednesday, July 29, at Farrell's Funeral Service Inc., 84 South St., Auburn. A Mass of Christian burial will be celebrated at 11 a.m. Thursday, July 30, in St. Patrick's Church in Aurora. In lieu of flowers the family requests that those who wish may send memorial contributions to the Good Shepherd Catholic Community of Southern Cayuga County, Sunshine Horses, or a charity of one's choice.