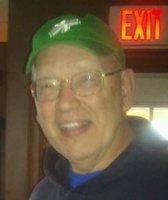 Mr. Joseph L. "Joe" Flanigan, 77, passed away Friday, July 10, 2020 at home peacefully surrounded by family. A lifelong Auburnian and an active member of the Auburn Community for many years. A graduate of Mt. Carmel High School, St. Bernard's College, Auburn Community College and a Master's from SUNY Oswego. He was a retired math teacher from the city of Auburn School District. Joe was part of the core group of volunteers to open Matthew House, serving on its board of directors and was a past president. He was a volunteer for Hospice of the Finger Lakes, area food banks, and in earlier years Auburn Players. Joe was a devoted husband. He married the love of his life and cared for her until the day she died. He took his vows seriously and stood by her side through sickness and health. She was his one and only. An amazing father. He instilled a great faith and values in his children. He taught them to be kind to others regardless of their past or lifestyle. He taught them how to be responsible adults and important life skills. He became an amazing grandpa AKA "Grandpa Joe" and all of his grandchildren adored him. He adored his grand-children as well. He was a very proud father and grandfather. He loved his donuts and coffee. Tim Hortons was his favorite hangout until it closed. He hung out with his buddies and would tell jokes and shoot the breeze almost on a daily basis. Dunkin Donuts became the new spot when Tim Hortons closed. Joe had a major sweet tooth. He would even get cookies from Matthew House whenever he stopped by there. Joe loved to help people from all walks of life. It didn't matter where you came from or what your lifestyle was, he was always willing to lend a helping hand. He was a mentor and friend to many. Joe was affectionately known as the Mayor of Chestnut Street in Auburn. That is how he greeted new neighbors on the street. A social butterfly, he loved to talk to many people. Nobody was stranger to him. He had a welcoming open heart and loved conversations with random people.He loved music and theater. He was involved in plays including "Fiddler on the Roof" where he played the rabbi. NAMASTE - he embodied the meaning of this word. "... passing positive energy on to the one receiving the gesture" He wanted to send positive energy to everyone that he encountered. He even had NAMASTE1 on his license plate. Joe loved to be in the outdoors with his family and friends - camping and hiking in the Adirondacks. Joe was a member of the Auburn Retired Teachers Association, and always kept in touch with the retirees. It was his family that made him proud and keeping in touch was a great pleasure. His wife Karen Fallesen Flanigan passed away in 1997. Surviving are their children, David (Carlotta) Flanigan, Silver Spring, MD, Sarah (Bawa) Issah, CA, Daniel (Carissa) Flanigan, Suffolk, VA; grandchildren, Nina Flanigan, Liam Flanigan, Amirah Issah, Rayan Issah, Makayla, Mason and Lila Flanigan. Joe had selfless devotion to his brothers and sisters, Raymond Flanigan, Charles (Deanna) Flanigan, Helen A. Flanigan. Nieces, nephews Grace and Charles Flanigan, Leah, John Elizabeth Mary and Katie Fallesen. Brother-in-law George Fallesen. He was also predeceased by a sister, Mary Flanigan and their parents, Clement and Anne Lavey Flanigan and a nephew, Georgie. A memorial Mass and a celebration of Joe's life will be held at later date when all can travel and gather safely. Interment will be in St. Joseph's Cemetery. Memorials may be remembered to either Matthew House or Hospice of the Finger Lakes. Farrell's Funeral Service, Inc., 84 South St. Auburn NY. A teacher that inspired so many people - letters and Facebook posts show how much of an impact he had on generations of kids that he taught and mentored. His contagious optimism, community service and Irish wit will be greatly remembered and missed.