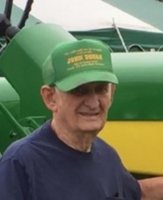 Mr. Donald H. Fromel, 87, of 5875 Route 38A, Auburn, (Hamlet of Owasco), unexpectedly passed away Sunday, May 24, 2020, at home. Donald and his wife, Helen Reilley Fromel, have been longtime residents of Owasco and members of St. Ann’s Church. They were married at St. Ann’s on Sept. 26, 1959. The son of Nicholas and Mary Dunda Fromel, Don was a graduate of Central High School, and was a U.S. Navy veteran of the Korean War. He had retired from ALCO, and in his early years owned a Gulf Gas Station on Myrtle Avenue with his brothers. He had worked part-time at Barski Farms and in later years at Farrell’s Funeral Service, Inc. He was a great mechanic, well-known for the rescue of many lawn mowers and lawn tractors. His front lawn was always with several for sale. During the winter he would raise a couple of calves, and during the summer he loved a good auction and lately enjoyed selling his treasures on eBay. He always enjoyed the news and coffee hour at the Owasco Store. A great fan of the Auburn Doubledays, St. Ann’s Church was always under his watchful eye for maintenance and up keep. Surviving are his wife, Helen R. Fromel; son, David Fromel and his wife, Kelley; grandson, Brandon; granddaughter, Jessica; great-grandchildren which were his pride and joy, Jordan and Lorelei, of Auburn; his sister, Betty Jane Fromel Festa, of Sennett; brother, William and wife, Mildred, of Reno, Nev.; several brothers and sisters-in-law, nieces, nephews, and cousins. He was predeceased by brothers, John Fromel, Andrew Fromel, Michael Fromel, and Stephen Fromel; sisters, Julia Fromel Maloney, Anna Fromel Barski, and infant sister, Elizabeth Jane Fromel. Private services were held at the convenience of the family. Interment was in St. Joseph’s Cemetery. Memorials may be remembered to either St. Ann’s Church or the Owasco Fire Department.