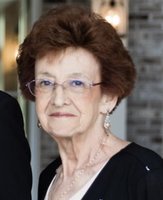 Our beloved wife, mother, grandmother, and friend, went to be with Lord at 3 p.m. on April 18, 2020, at Community General Hospital in Syracuse after a long battle with cancer. Elaine’s love of quilting, genealogy, and the history of Owasco and Auburn only took a second seat to family and loved ones. A graduate of Skaneateles High School she worked for Sear, Roebuck and Company where she met her husband, James. Married in 1968 they had four children and six grandchildren. She worked for Stella Maris Retreat Center, Auburn Credit Bureau, and Fort Hill Cemetery where she helped many families through difficult times. She was predeceased by her father, George Glanville; her mother, Marion (Surdam) Glanville, and two infant brothers, George and Donald. She is survived by her husband, James Hutson; her four children: daughters, Jennifer (Chris) Tortora, Teresa (Ed) Fabrize, and Sarah (Morris) Houghton, and her son, Luke Hutson; her six grandchildren, Nicholas (Emily) Tortora, Meghan Tortora, Brienna Fabrize, Zachary Fabrize, Morris Houghton, and Maxwell Houghton. She is also survived by her brother, David (Betty) Glanville; along with many nieces, nephews, and friends. Due to the current situation, a private service was held for the family at Farrell’s Funeral Home with burial in Soule Cemetery. A memorial service for family and friends will be held at a later date. In lieu of flowers, donations can be made in her name to the Dana-Farber Cancer Institute.