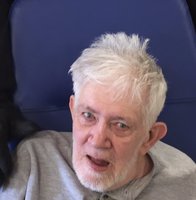 Charles, “Charlie”, “Chuck” Murphy, 72, went home to God on December 31, 2019 after a brief illness. Charlie, or Chuck as he preferred to be called was a quiet soul who touched many lives and hearts during his 72 years. To those who knew him in his early years, he seemed to have a very difficult life. He was challenged from birth and lived on the fringes of society. But Chuck never gave the impression that his life was hard. He accepted himself and everyone around him. He was non-judgmental and never spoke unkindly about anyone. In fact, he loved life, family, friends, science fiction and starlight mints. He loved a good joke, especially one that he invented. When he laughed, his bright, blue eyes crinkled up and twinkled. Chuck was a man who trusted in God’s providence. He was an example of a life well lived. Charles was predeceased by his parents, Paul and Hilda Murphy, grandmother, Celia Murphy and good friend Robert Connor. He is survived by several aunts, uncles and many cousins. The family would like to thank the staff on Unit 2 at Huntington Living Center and the ICU at Geneva General Hospital for the care and compassion they showed Chuck. Rest well Chuck and remember, “No double reverses.” There are no calling hours. Interment services will be in St. Bernard’s Cemetery, Scipio Center NY. in the spring. Farrell’s Funeral Service, Inc., 84 South Street, Auburn are in charge of arrangements.